The Navajo people have a rich history of beautiful traditional arts and crafts that have been passed down from generation to generation. Weaving is one of the earliest expressions of Navajo art and even today, the intricate rugs and tapestries made by the natives serve a canvas for them to represent their traditions and cultures. According to some sources, the weaving, in spite of visual images and symbols depicted, were never used for ceremonial purposes. They were created by the Navajo women because Anglo traders were willing to pay hefty prices for their perceived spiritual symbolism. Today, the themes and motifs traditionally used in the weaving have begun to appear on more modern items like wallets and mugs. 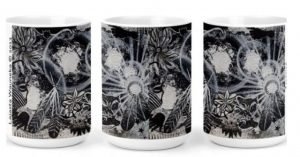 There are few distinct patterns, designs, and motifs that can be found in essentially all Navajo weaving styles. Here are some of them:

The Navajos believe that the Holy People are powerful deities and the Spider Woman is one of them. She gave the Navajos the secret on how to find their way in the world. She was also the one who taught them how to weave. The cross, which has no connection to Christianity, is the symbol of the Spider Woman. It represents her teachings and her spiritual energy. If you look at native Navajo arts and crafts, you will notice that the cross is a recurring theme.

The triangle and the diamond are arguably some of the earliest design elements to be used in Navajo weaving. According to some people, the diamond is a symbol for the Navajo Homeland, which had four sacred mountains at the four corners. The triangles often placed over each other like building blocks, are used to represent a mountain Yeii. The Yeii are considered to be benevolent spirits. The Holy People, who created the Navajos, are also Yeii.

Lightning bolts are a powerful elemental force that symbolizes strength and power. In Navajo mythology, the weaving equipment was made of lightning. The lightning bolts, shown using a zig-zag designs on the corners of the weaving, were a way of imparting strength to the overall design of the blanket or tapestry. Modern interpretations of these designs can also be seen on items like wallets and coin purses.

Similar to a lot of early civilizations, the Navajo artists were inspired by their history and culture. If you wish to embrace the beauty of Navajo arts and crafts, we have a range of products for you to choose from, ranging from coin purses that have traditional rug designs to colorful coffee mugs. You can go through our website for more information.